If you Google the "ridge hike in Switzerland", you're going to find, in the top 10, maybe even top 3 Brienzergrat also known as Hardergrat ridge. Internet content starts with amazing drone videos, through people being scared for their life and bailing off, to people claiming that it's overrated. So how was it from my perspective?

For the first go it seemed like a good idea to do the "easy" variant going between the mountain tops: Harder Kulm and Brienzer Rothorn Since this is not a circular route, we had to first decide which way to go. We went with Rothorn -> Harder direction because:

Early start. Coffee. Pack running vest. Properly tie shoelaces. Go to Interlaken Ost. Board the train. Sleep. But not too much. Change in Brienz. Admire the cutest train logo ever. Sleep for an hour, while counting the six tunnels of BRB. We're at the start of the trail!

The trail starts with an amazing set of views that is completely worth it on their own and got even better as we hiked on.

Exactly one-hour after the start we met the crux of the route: The Tannhorn. Which is described as:

It’s the tallest peak along the route and to get up there requires a rocky climb up a short T5-rated outcrop of rock. A portion of that climb does have a wire rope which is less helpful for holding onto, more for indicating the safe place to climb. It isn’t that difficult to climb, but it is very steep. The rest of the climb to the peak of Tannhorn along its long backbone is the most exposed and narrow section of the trail.

Speaking from personal experience from some UK scrambles, I doubt that in Scottish guidebooks this would be marked as "exposed" and even less so "with few bold moves". It is not for the faint-hearted, but good shoes, slow moves and three points of contact rule should anyone reasonably fit get through. 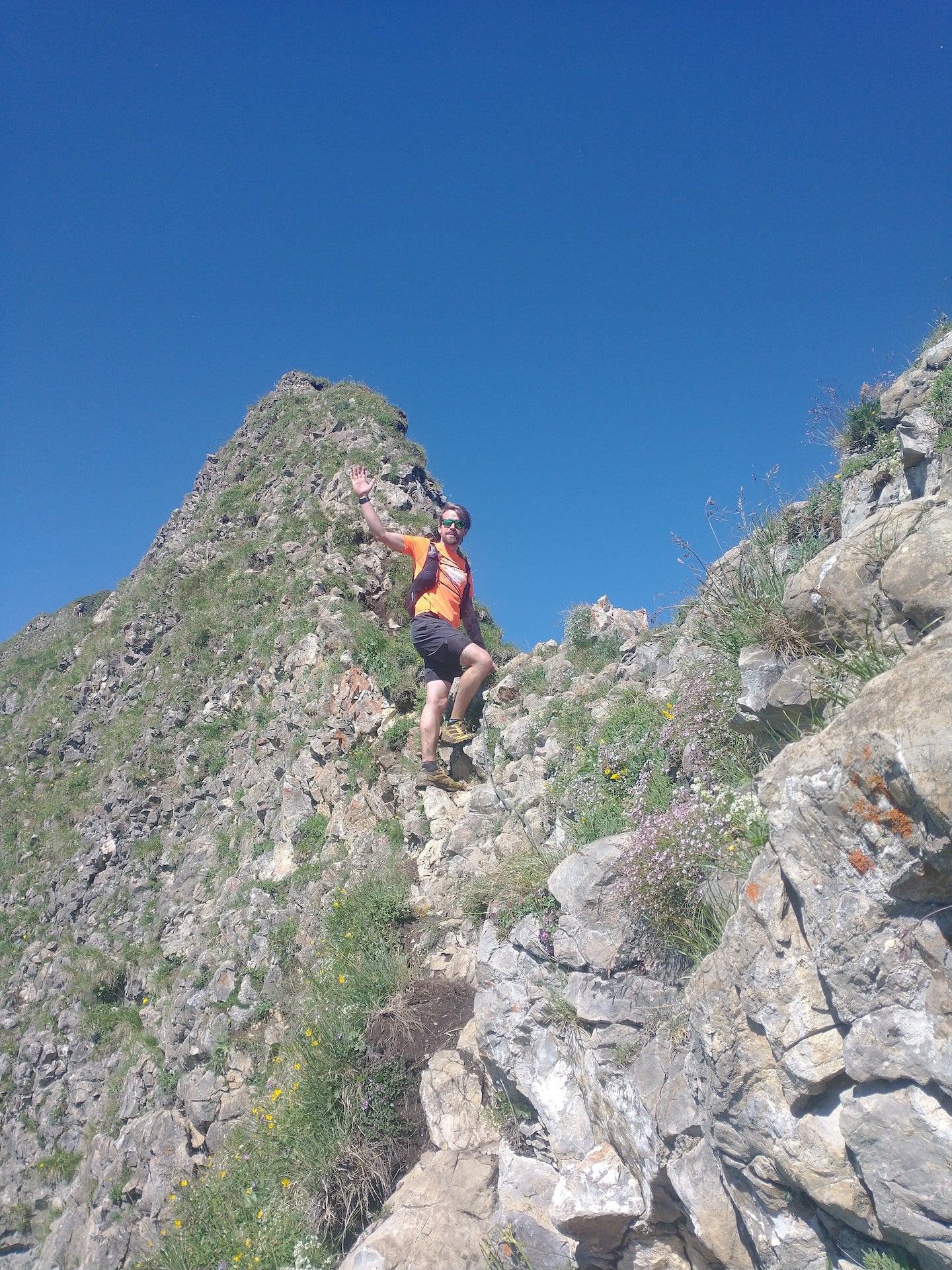 Speaking about the relativity of the perception of the dangers: We've met quite a few people that just run the ridge as they'd be on tarmac. And also a few that were genuinely scared for their lives when the ridge got narrow. So it depends 🤷‍♂️. 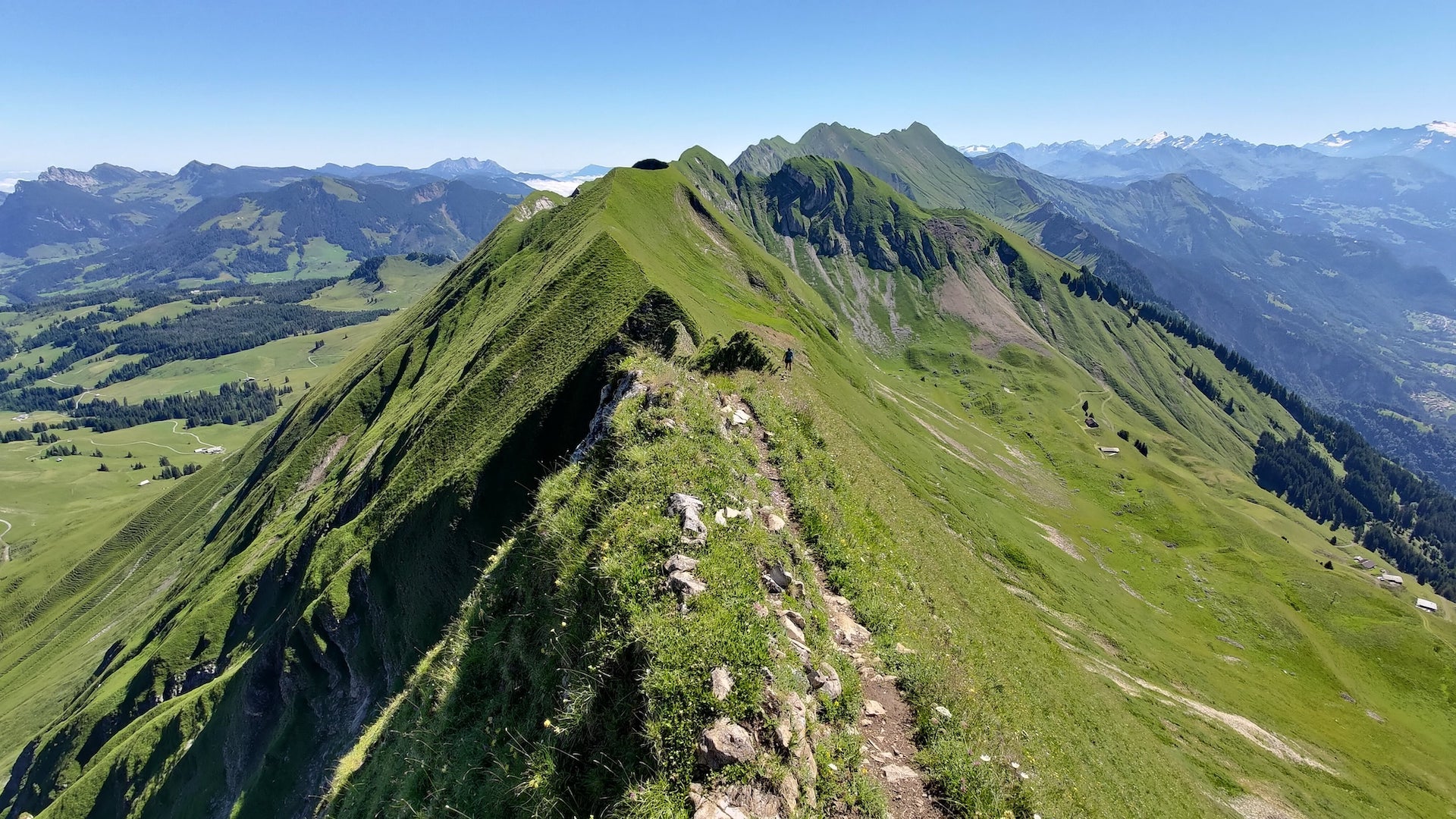 Moving along the grassy tops we got an amazing set of views, which can be only described as: What you see on Instagram looks way worse than reality.

When we passed 3/4 of the route, the terrain became runnable and we could enjoy some "wheee" and "uiii". As a bonus the path occasionally snaked into the forest, so we could get a tiny break from the omnipresent sun. 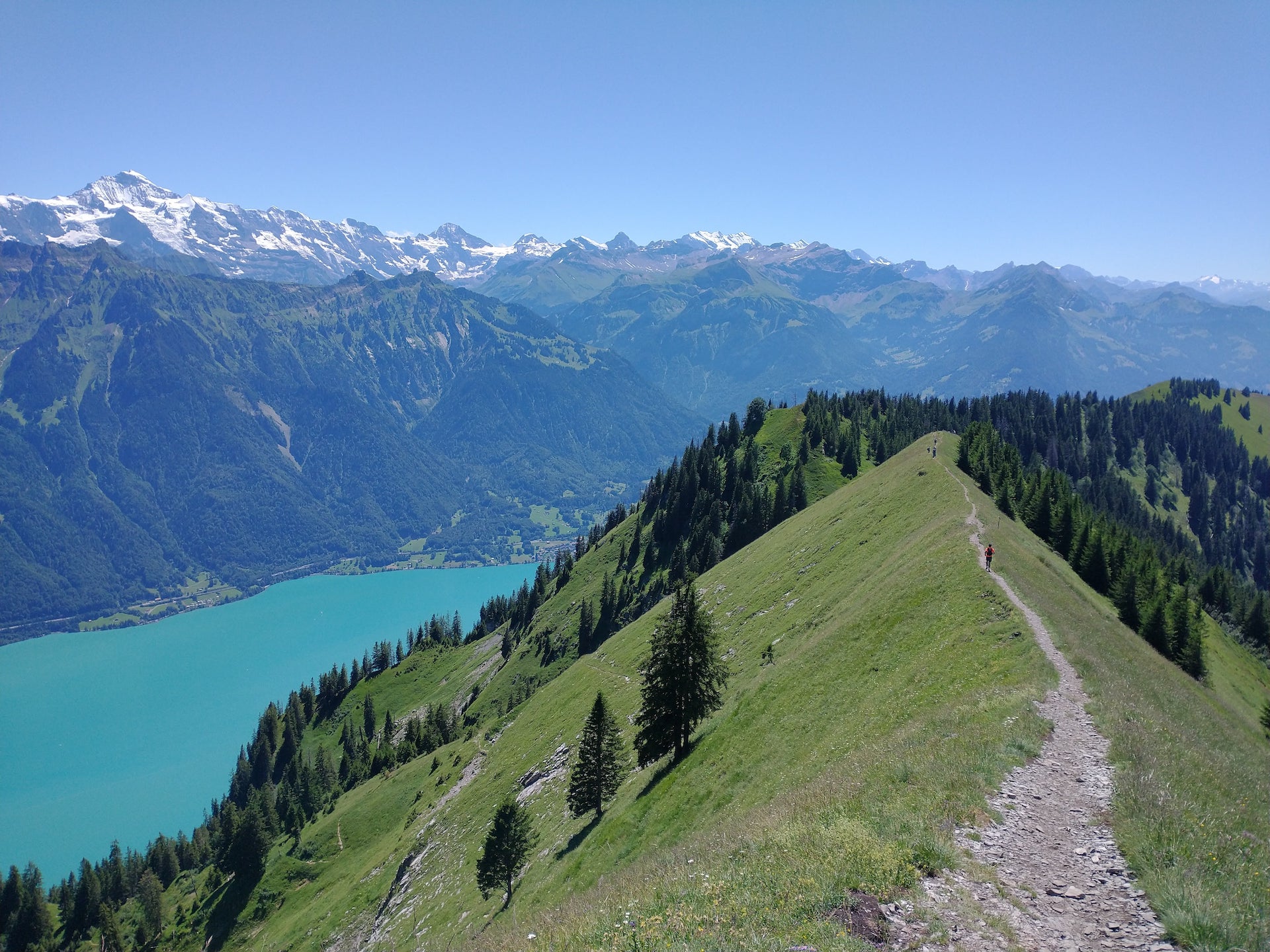 Beer at the Harder Kulm kiosk and late evening funicular down back to Interlaken.

I enjoyed this wee adventure very much. The views, the trail, the tiny scrambles, all of it. Even talked to some locals that are hiking it every year and they assured us that "this was the crux and it's going only easier from now on". If you're in the area and have a day to kill, then you should try it.